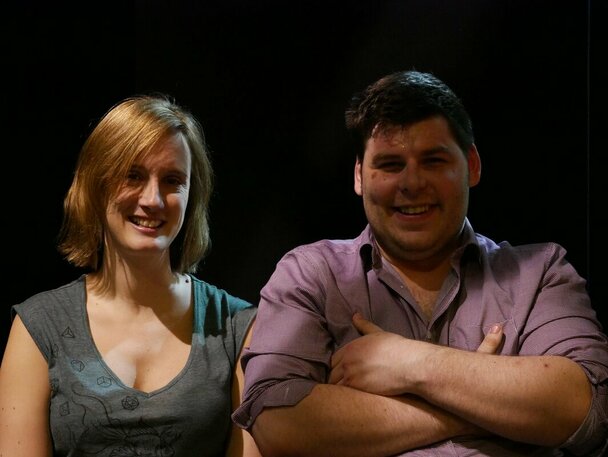 Emma and Steve at Rehearsal for Thirtysomething. Photo by Phil Wintle
So, who are Dagna? Why are they? What are they? How do we get one? Much and more to be answered in the next paragragh...

​Dagna Theatre formed in 2014 with theatre practitioners Steve Archer and Jake Maidment, during their third year at the University of Plymouth. During the three years at said establishment, Steve and Jake worked very intimately on their own personal projects (see more below) until working together to create Project Four. After this initial piece, the two started to build a creative group of outside dramaturges and choreographers who have worked with Dagna in building the works they have been producing ever since.

​Currently, Dagna is no longer situated in Plymouth, as young artists are paid in exposure rather than rent money. We are now a small company of two in Leicester, with a view to expanding when the feeling takes us. 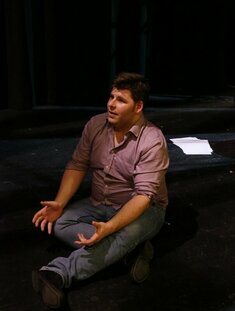 ​Steve is the writer, musician, director, actor and general insane member of Dagna Theatre. We've decided it's easier to refer to him as our Performance Manager. Situated in Leicester, Steve's taken his training from the University of Plymouth and been working on all the shows you find on this site and much more.

​Steve has been trained in contemporary performance, vocalisation, clowning, contact and theatrical improvisation, post-dramatic theatre, writing, actor-musicianship and physical theatre. He takes a large inspiration from Theatre of the Absurd, though many of his pieces only skim the surface of it. He is also a semi professional musician and author.

​"Open Mic Night": Have you ever wanted to be a rockstar or a pop idol? Well you're in luck! Follow Steve into an intimate gig as he discusses the placement of a musician in 21st century theatre. Looking into past work and the theory behind music, he explains writing songs, flirting with barmaids and more importantly how to get paid in beer!

​"Who is Danny Kaye?": A questioning of the patriarchal views forced upon a boy as he grows up into manhood. Chuck has been raised by three men, two of which are somewhat bipolar in their views and nature; the third seems to be a mystery. Using the experiences of his childhood, Chuck delves into the thought process of the average 21st century male whilst further investigating who is this mysterious Danny Kaye?

​For more stuff by Steve, go to www.brownbeararcher.wordpress.com 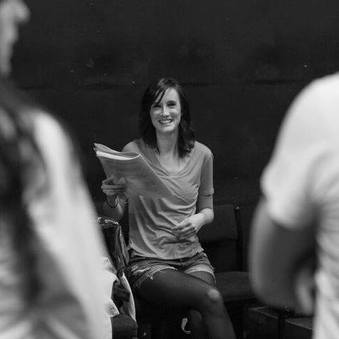 ​Emma is our newest member of Dagna Theatre. We've decided to refer to her as our Performance Artist in Residence. Situated in Leicester, Emma's background in theatre dwarfs that of all members of Dagna combined! Trained in Imaginative Writing at Liverpool John Moores University, and currently studying Script Writing for Screen, Radio, and Stage at Bath Spa University, Emma has worked nearly every role a theatre company can offer and we've decided to pinch her for both her seasoned acting and writing skills, with a view to get her on some of the piling paperwork too!

She has performed in a plethora of shows at The Little Theatre, has written her own shows, and is genuinely just a pleasure to work with.

"Breaking and Entering": A woman comes home after the worst day of her life only for her house to be burgled just as she sits down with a glass of wine. However, things quickly turn as the two find themselves enamored by one another. Well, it takes all sorts...

"Thirtysomething": Nicola and Ben meet on a night out, both deciding to go home with one another for different reasons; Ben only wanted a one night stand. Nicola, unaware of this and not taking it well when she finds out, takes Ben hostage until he agrees to be her boyfriend. 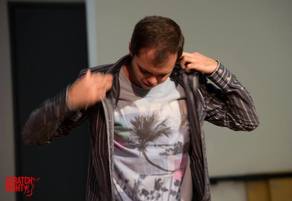 ​Jake was the Managing Director of Dagna Theatre. He was the calm and collected member. The Admin department. Our man in the South(-ish). Situated in Swindon,

​"InPrivate": An audience enters a darkened room with a blank projector and faceless auditors. As they watch, the auditors take members of the crowd and air their online presence for all to see, with thought provoking results.

​"Big Red Button": Two performers and a big red button. Where are they? What does it do? One performer really wants to know though the other won't let him push it. We follow the two through a sketch based clowning show as we ask, what could possibly go wrong?
Dagna Theatre, copyright 2019